Cosmetic peptides as new weapon in the battle against skin aging 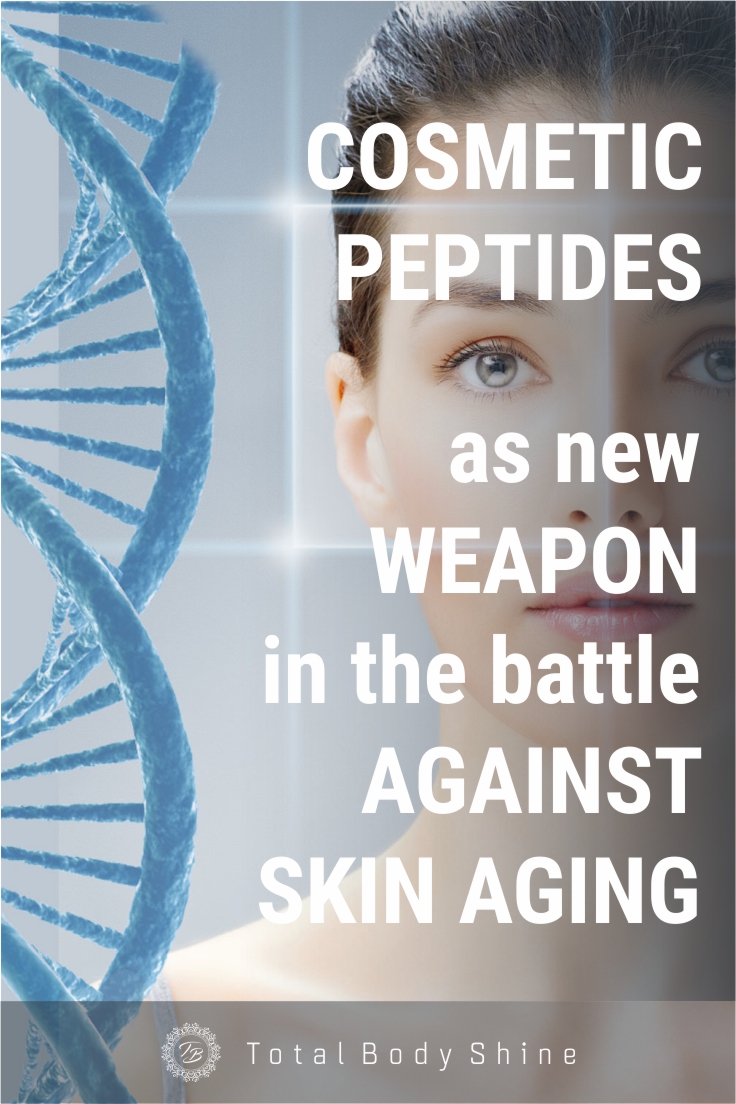 Today’s cosmetic products demand high-performance ingredients that promote anti-wrinkling & anti-aging. There are a number of types of ingredients offered to formulators as “active ingredients.” One of the most popular of these “active ingredients” are peptides. As a new weapon in the battle against skin aging, synthetic peptides are the latest ingredients to be added to the ranks of cosmeceuticals and dermaceuticals being developed by skin care companies all over the world. In this post we’ll look at peptides a little more in-depth.

Our skin is naturally full of neuropeptides, but as we age, it loses the ability either to produce or utilize some of its natural peptides. When a person applies peptides topically, it tricks the skin to produce more collagen or elastin naturally. While Botox smooths wrinkles by paralyzing the muscles through an injection of a solution derived from the botulism toxin, topical “Botox in a jar alternatives” mimic natural peptide activity by sending the request to the cells to do the work themselves.

Inspired by naturally-occurring proteins and peptides, neuropeptides can be used to target cells, communicate with them, and get them to perform specific tasks, like:

Neurotransmitter inhibitors
These peptides are added to cosmetics to reduce wrinkles because they inhibit acetylcholine release by a variety of chemical interactions. The most extreme neurotransmitter include the Botulism toxin (Botox). Less invasive versions have been developed for use on skin and the hypothesis is that they relax the muscles of facial expression so they don’t contract as much which causes wrinkles to relax. These neurotransmitter inhibitor peptides have been shown to reduce certain types of wrinkles by approximately 30% (in in vivo studies.)

Signal peptides
These peptides are added to skin cosmetics because they can stimulate skin fibroblasts to produce more collagen, elastin, and other proteins in the matrix of the dermis. Boosting these structure proteins makes skin look firmer and fuller.

Carrier peptides
These peptides deliver trace elements, like copper and magnesium, which help with wound repair and enzymatic processes. These trace elements have been shown to improve pro collagen synthesis, the elasticity of skin, and overall skin appearance. These are sometimes called “penetrating peptides” or “membrane transduction peptides.”

Enzyme inhibitor peptides
Enzyme inhibitor peptides can reduce the breakdown of collagen and other proteins by interfering with processes that break down those proteins. For example, some enzymes degrade structural proteins like collagen. A peptide derived from rice proteins can inhibit the activity of the MMP enzyme and thus keep more collagen around. Peptides derived from soy proteins can also work to inhibit enzymes, specifically proteases. They may have some potential for inhibiting hair growth and reducing pigmentation.

Cosmetic peptides are leading a beauty revolution with multi-functional properties, including their ability to regulate certain biological functions. As skin care companies pursue this booming field of research, there is a growing need to have high quality, custom cosmetic peptides.

Some of the most efficient cosmetic peptides

This peptide has been proven to works much like Botox, which reduces muscular contractions in the face keeping the skin smooth. The concept behind this peptide is to mimics the effect of snake venom (found in Temple Viper) to temporarily deaden the muscles in the face to prevent the formation or deepening of wrinkles.

The biological activity of Dipeptide Diaminobutyroyl Benzylamide Diacetate reduces the contraction frequency of muscle cells on the face and helps reduce laughter lines, along with crow’s feet and forehead wrinkles. It has excellent skin smoothing properties, and the muscle contraction is reduced only after 2 minutes of treatment. It’s fast acting, long lasting and fully reversible.

According to the manufacturer’s in-vivo studies, 4% Syn-Ake used for 28 days resulted in 21% smoother and 15-20% less wrinkled skin with max values up to 52%.

Acetyl Octapeptide-3 is essential in fine lines and wrinkle reduction, as it works to relax the muscles and vesicles in the areas where signs of aging are formed from repetitive facial expressions. Acetyl Octapeptide-3 inhibits these contractions, in much the same way that Botox does. For this reason, it is sometimes called “Botox in a jar“.

Octapeptide-3, known as Snap-8, is a rather new peptide that is an advanced version of Argireline® (30% more effective), which many researchers claim is the best anti-wrinkle ingredient available in skin care products.

Using this peptide will not irritate sensitive skin because the body does not try to rid itself of the peptides. According to studies, it can reduce the depth and appearance of wrinkles by 34.9%.

Pentapeptide-18 is an alternative to fight against expression lines. Muscles remain in rest and the formation of wrinkles and expression lines is curbed. The face is smoother, and skin looks younger. Pentapeptide-18 is a neuropeptide that gives Botox-like results, and it works synergistically with Acetyl Octapeptide-3 by increasing the benefits of both peptides. It further prevents the existence of lines and wrinkle-formation mechanism in a new way.

Pentapeptide-18 reduces the depth of wrinkles caused by the muscle contractions of facial expressions, especially in the forehead and around the eyes in just a month.

Palmitoyl Tripeptide-5 has the ability to penetrate the epidermis and enter deep into the dermis, where it stimulates collagen production and healthy tissue growth. It “gives the instructions“ to skin cells about what to do. When cells fail to communicate properly, collagen production can slow drastically and cause premature aging and wrinkles. For this reason, palmitoyl tripeptide-5 is considered a key collagen building ingredient for anti-aging skin formulations aiming at attenuating lines and wrinkles and correcting laxity. It also has the ability to prevent toxins from doing harm by telling the cells to either flush out the toxins or renders it inert.

In a clinical study, participants showed significant visible reductions in average skin roughness and wrinkle depth. Applied twice daily on the affected areas, it significantly reduced mean wrinkle severity by more than 50 percent. Visible improvements were observed within as little as 15 minutes and peaked at three months. Palmitoyl tripeptide-5 was found to be safe and well tolerated, with no major side effects.

A mixture of two peptides, called Palmitoyl Dipeptide-5 Diaminobutyroyl Hydroxythreonine, Palmitoyl Dipeptide-6 Diaminohydroxybutyrate provides both collagen-boosting and anti-aging benefits. They stimulate elastin and new collagen growth in the skin, which makes it appear fuller and firmer to the touch.

Those two peptides help to counteract the depletion of vital support structures by significantly stimulating all relevant proteins of the Dermal-Epidermal Junction (DEJ). They have outstanding activity on skin tonicity, firmness and suppleness after only two months.

Hexapeptide-10 promotes cell binding, with visible skin restructuring and firming abilities. Hexapeptide-10 is able to fight the degeneration of the dermo-epidermal junction caused by aging which starts to decrease from the age of 30. Hexapeptide-10 significantly increases in the dermis density and improves skin elasticity and tonicity, boosting synthesis of Laminin-5, and returning the skin to a youthful stage. Laminin-5 is the second most abundant protein in the skin after collagen and is often overlooked.

According to in-vivo studies, it shows significant increase in skin compactness (>40%), skin tonicity (>36%) and skin smoothness (>45%) after 60 days.

Our luxury Swiss Formulated skin serum is loaded with more than 20 of the most advanced anti-aging ingredients that target specific issues or have damage-repair benefits. L’amour Youth Activating serum, with an instant smoothing effect triggers self-renewal processes with a blend of 6 clinically validated anti-aging peptides to unleash their youthful potential and give our serum a boost.

In a clinical study on peptides used in our formula, participants showed significant visible smoother skin after only a few minutes. According to studies, the depth and appearance of wrinkles can be reduced up to 52% after 1 month. Our formula contains 6 clinically validated peptides which helps to take years off your appearance in just a short time and with long-term effectiveness.

For more information on peptides look at: